Defibrillators and the uphill battle against cardiac arrest

Defibrillators and the uphill battle against cardiac arrest 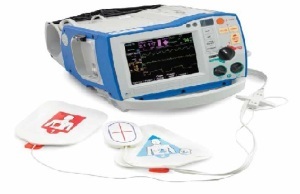 From the May 2015 issue of HealthCare Business News magazine

It can happen out of nowhere – over dinner, during a basketball game, or at home reading the paper – and when it does, a few short minutes can mean the difference between life and death.

The mortality rate associated with cardiac arrest can look frighteningly out of place in today’s advanced health care landscape. According to the American Heart Association, less than ten percent of the 359,400 cardiac arrest victims stricken outside of a hospital setting in 2013 survived. The survival numbers for cardiac arrest within hospital walls are better, but still lower than 50 percent.

But cardiac arrest’s unpredictability is a big part of what makes it such a deadly problem. It typically happens outside of medical facilities, and on people who don’t expect it. It’s a health care battle that is largely fought outside of hospitals. Automated external defibrillators (AEDs) and cardiopulmonary resuscitation (CPR) are frontline defenses— and every minute without them cuts drastically into the victim’s chance for survival.

Counting on regular people to save lives
Over the last several years, AED manufacturers have waged a successful campaign to integrate their systems into everyday locations like restaurants, gymnasiums, schools, health clubs, casinos, and on board fire trucks. As such, AEDs must be intuitive enough for someone with no medical experience to operate them while under the pressure of a medical crisis.

Debra Ford, director of marketing at Defibtech, a company that manufactures AEDs, says they are manufacturing a full-color interactive display system that – along with audible instructions – shows the rescuer what to do with step-by-step video footage. There are many cases where abnormal heart rhythms cannot be shocked and, according to Elijah White, VP of marketing at Zoll Medical, a manufacturer of AED and ALS solutions, CPR is the one thing that virtually all cardiac arrest patients need. He says the general public associates AEDs with shocking people, but they also can provide crucial support in administering CPR.

“The person in the gym doing CPR on their friend that just fell is terrified,” says White, “and they will be expected to deliver chest compression, so our system tells them if they are going fast enough or deep enough.”
1(current)
2
3
4
5