Bringing IBM Watson into the palm of your hand 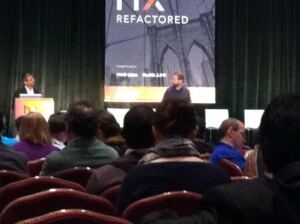 Sridhar Sudarsan (left)
and Vance Allen (right)
speaking about CafeWell Concierge
Imagine an application on your smartphone that can speak and give you personalized answers to every health related question you might have. Soon you won't have to imagine it because it's going to become a reality. The topic was the focus of a keynote speech titled "IBM Watson: From Jeopardy Winner to Personal Health Concierge", at this year's HxRefactored conference in New York.

The application is called CafeWell Concierge and it was born from a partnership between IBM and Welltok, a social health management company, in November. It combines Welltok's flagship health optimization platform and IBM's cognitive computing system called IBM Watson, enabling the user to have a personal dialogue with the application.

"You can use concierge to ask very hard health care questions and Watson will give you answers in a very natural language form," said Vance Allen, chief technology officer of Welltok.

Allen opened the keynote with an example: Scott is a developer with a health care company, but he's stressed out since he has a very busy work life. He gets an invitation to join CafeWell Concierge and then later on goes to his doctor to get a physical.

When he goes into the application later, Watson asks Scott how his appointment went, and he tells Watson that he found out that he's pre-diabetic. Watson then goes on to answer any questions Scott has about the condition and even suggests activities he can engage in to improve his health.

"It leverages the power of cognitive computing and Watson to allow you to have a personal dialogue, and acts as your personal health guide," said Allen.

"That's what we're trying to do here, with Watson — bring in that cognitive computing piece," said Sudarsan. "That's one big missing gap that we're bringing in."

He said this is the start of a new era of computing that's moving away from programmatic computing toward cognitive computing. It's shifting toward technology that can understand and sift through large amounts of data, which is important since the majority of data today is unstructured and it's continuing to grow.

But the question remains as to how Watson is going to help health care from a doctor's perspective. Sudarsan explained that one in five doctors use evidence-based knowledge and almost 80 percent of doctors spend five hours researching new studies or literature every month. Doctors don't always have the bandwidth to learn and research all of that, and that's where Watson could come in.

IBM is also trying to figure out how they can help doctors diagnose cancers, especially lung and breast cancer. "We're trying to see how we can take Watson out into the areas where don't have expertise," said Sudarsan.

CafeWell Concierge is still under development now but Allen and Sudarsan said that it will be available this fall.

The secret to the ultimate biomed cart

Getting ahead in HTM