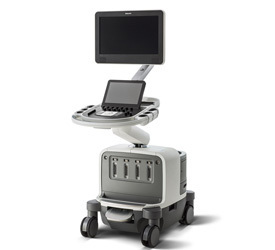 Philips and SonoCiné Inc. signed an agreement that will combine SonoCiné's AWBUS with Philips' EPIQ and iU22 ultrasound systems. SonoCiné's system is approved by the U.S. Food and Drug Administration to perform automatic ultrasound scans of the entire breast and lymph nodes for women with dense breast tissue. It's been cleared as an adjunct to mammography screening. But in most cases, it is not covered by insurance.

"Integrating the advanced engineering of SonoCiné's AWBUS with Philips' premium ultrasound systems will provide our customers with a new solution to address this population of women who are at higher risk of breast cancer," said Conrad Smits, general manager of Philips Ultrasound, in a statement.

An earlier study found women with dense breasts were not at increased risk of dying from cancer although they are more likely to get it.

Over a dozen states have laws that require providers to inform women receiving mammograms if they have dense breasts, and what types of options are available to serve as a supplemental screening.

The deal between Philips and SonoCiné mimics GE Healthcare's move in 2012 to acquire the Sunnyvale, Calif.-based U-Systems, the manufacturer of somo-v Automated Breast Ultrasound System.