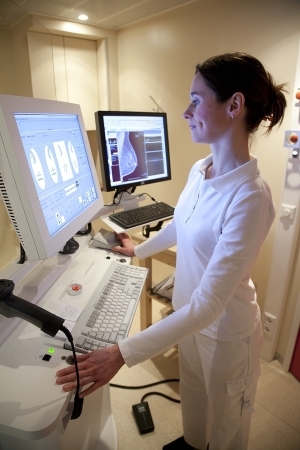 One of the most expansive mammography studies ever done is casting doubt on the widespread screening.

The Canadian National Breast Screening Study (CNBSS) evaluated 90,000 Canadian women for 25 years and found that annual mammograms for women ages 40 to 59 did not reduce breast cancer deaths. The results were published in the British Medical Journal.

Not only did the study find that the death rates from breast cancer were the same in women who received a mammogram and those who did not, it also found that it led to more false positives and unnecessary treatment.

The benefits of mammography have always been widely debated — this study is undoubtedly adding fuel to that fire.

The American College of Radiology and Society of Breast Imaging have debunked the study, calling it "deeply flawed and widely discredited." They went as far as to call on a panel of experts to review the CNBSS and found many issues at stake. For starters, they said that the mammography equipment used to evaluate the women was not state-of-the-art and led to poor image quality. Additionally, these experts said that the technologists and radiologists who worked on the study were not properly trained.

But what was most concerning to the experts was the way the trial was conducted. They said CNBSS violated fundamental rules for valid, randomized, controlled trials. Nothing is supposed to be known about the study participants, yet women enrolled in the CNBSS had had initial examinations.

"They knew which women had breast lumps, many of which were cancers, and which women had large lymph nodes in their armpits, many of which indicated advanced cancer. Before assigning the women to be in the group offered screening, or the control women, investigators knew who had large incurable cancers. This was a major violation of RCT protocol," said a statement from ACR.

The experts said this created a situation where women with advanced breast cancer were assigned to the screening group over the control group.

"This guaranteed more deaths among the screened women than the control women," said the statement.

For now, guidelines for mammography will not change. The U.S. Preventive Services Task Force suggests women ages 50 to 74 get mammograms every two years. However, the American Cancer Society told the New York Times that it has convened an expert panel to review all mammography studies, including the CNBSS, and would revise its guidelines for screening mammography later this year.