Special report: Nurse practitioners fight for their right to practice 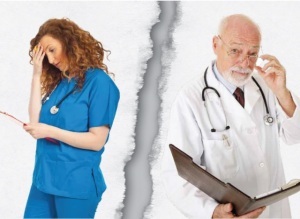 A public relations specialist in Chicago, recently recounted a 2 a.m. visit to a chain pharmacy in his home city. His son had a severe earache and rather than wait in an ER for an hour or two, he, his wife and son headed to a national pharmacy chain where a nurse practitioner (NP) was on duty. The NP examined his son and made the determination that he had an ear infection, prescribed some antibiotics and they were on their way. But the story didn’t end there. “When my wife mentioned it to our family doctor, he was livid,” he recalls. “He was on the phone and yelling so much that my wife just walked over and handed me the phone.”

It seems the doctor’s fury was based on his perception that the NP shouldn’t have been examining the boy—and it’s a perception shared my many doctors who believe NPs are not qualified to diagnose or prescribe a treatment. However, that perception is just one of the arguments presented by those opposed to allowing NPs more autonomy and one that the nurses are working hard to combat.

Decades in the making

The role of an NP was established in the mid 1960s. Loretta Ford, a registered nurse, and Henry Silver, a pediatrician, founded a master’s level program at the University of Colorado’s School of Nursing. Ford and Silver created the program at a time when there was a shortage of health care services across the country.

Although NPs focused at first on pediatric care, today, the scope of practice has expanded to provide additional competencies and areas of focus with family practice, psychiatric-mental health, gerontology and midwifery.

Proponents of providing greater independence for these professionals are circling back to the reason the profession was created in the first place — a shortage of health care services for a population with growing needs for them.

Fifty years after the first NPs graduated, the U.S. is again looking at dire health care provisions. With the baby boomers getting to the age where more care will be needed, and with life expectancy also up, the country could see shortages of care for decades to come. Couple the increased need for care with dwindling tax revenue as a large portion of the population heads into retirement and it’s apparent any stop-gaps will be difficult to fund. Unfortunately, the bad news doesn’t end there. The final piece to the health care house of cards also goes back to the shortage of the ‘60s. Many of the professionals who jumped into the health care field during that time can be counted among the number of those retiring.
1(current)
2
3