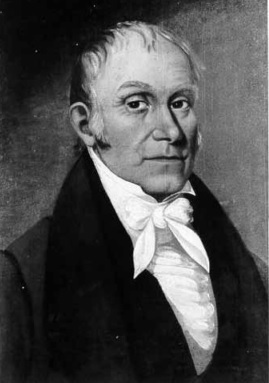 On Christmas day, 1809, Ephraim McDowell became the first surgeon to successfully remove an ovarian tumor after operating on patient Jane Todd Crawford in his log cabin near Motley's Glen in Green County, Kentucky — a small frontier town less than 70 miles from Abraham Lincoln’s birthplace. With this operation, the field of abdominal surgery was born.

McDowell was the ninth child of Samuel and Mary McDowell, born in Rockbridge County, Virginia. His father was a prominent, seasoned military man, a veteran of the French and Indian War and a colonel during the American Revolution. In 1784 Samuel McDowell was appointed land commissioner and moved his family to Danville, Kentucky. There, he presided over ten conventions that resulted in the drafting of the Kentucky Constitution.

McDowell attended the classical seminary of Worley and James — the best education the frontier offered at the time. Starting at age 15, he spent three years as a medical student under Dr. Alexander Humphreys in Staunton, Virginia. He went on to attend lectures in medicine at the University of Edinburgh in Scotland from 1793 to 1794 and studied privately with John Bell.

Upon his return from Scotland in 1795, he settled in Danville, Kentucky and began his practice as a surgeon. In 1802, he married Sarah Shelby, daughter of Isaac Shelby, war hero and two-term governor of Kentucky.

On December 13, 1809, McDowell was called to see Jane Todd Crawford in Green County, 60 miles from Danville. Her physicians thought that Mrs. Crawford had an overdue pregnancy, but Dr. McDowell knew this was something different: he diagnosed her with an ovarian tumor.

Desperate to avoid a slow and painful death, Crawford begged McDowell to operate on her. He cautioned her that the best surgeons in the world thought the operation impossible to perform, but Crawford was adamant that she wanted to proceed.

He determined that it would be difficult to remove it completely, so he tied a ligature around the fallopian tube near the uterus and cut open the tumor. The whole procedure took 25 minutes.

Mrs. Crawford astonished McDowell by making an uncomplicated recovery. “In five days I visited her,” he reported later, “and much to my astonishment found her making up her bed.” She returned to her home in Green County 25 days after the operation and lived another 32 years. This was the first successful removal of an ovarian tumor in the world.
1(current)
2