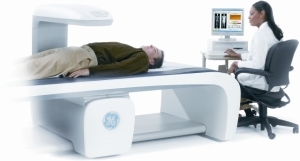 People who want to know their body’s breakdown of fat, muscle and bone have a few options. They can strip down to a bathing suit and submerge themselves in a weighing tank, then hold their breath for the proper amount of time or risk starting the process all over again. If that doesn’t tickle their fancy, they can be pinched by skin calipers. Or they can stand in Bod Pods, futuristic looking capsules that take measurements based on air displacement.

But there’s a newcomer on the body composition scene, in the form of a piece of equipment that’s been under physicians’ noses for years: bone densitometers, or DXA scanners. More and more imaging centers and health clubs are using the modality traditionally reserved for bone density screenings to produce body composition studies.

The scan provides details of the fat content of the entire body, including the fat in places tools like calipers miss, like around organs, as well as muscle and bone mass. As a bonus, subjects don’t have to shuck clothing (minus metal zippers), and the scan only takes around six minutes. Plus, the specifics it offers puts it head and shoulders (and arms) above other methods.

“If a person gets a scan then comes in three months later, we can tell you, you’re down 2.1 pounds of fat in your left arm,” said Dr. David Parker, executive director at the Washington Institute of Sports Management in Kirkland, Wash.

While DXA scanners have always had the ability to do body composition studies, it has only been within the last year or so that OEMs have heard about them being used that way more often.

“What we’re finding is that a lot of people have concentrated on bone density, so as reimbursements and some other business has fallen off for them, they’ve found that by using body comp, they’re getting more utilization out of their systems,” says Michael Kelly, business leader for GE Lunar bone densitometers.

Kelly says that using DXA for body composition is still in early adoption, but that it’s taken off with professional sports teams, who use it to individualize and customize training for athletes.
1(current)
2
3
4