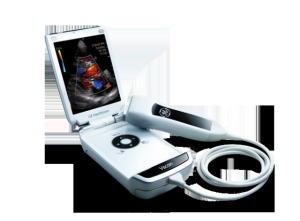 GE's smartphone-sized scanner, the Vscan
could be the future, but at a lower cost.
In the next 20 years, will ordinary people own small, cheap ultrasound units in their home, which they'll use to give themselves check-ups for chronic diseases or to gather data and beam it to a doctor's office? It's possible, says a leading expert.

Paul Carson, a professor of radiological sciences at the University of Michigan who delivered a lecture on Sunday at the AIUM annual conference in Midtown Manhattan, believes ultrasound has the chance to be the dominant imaging modality.

Not only does it have the potential to become a consumer product, but new therapeutic uses for ultrasound could expand the technology into fields such as surgery, where doctors could cut flesh using ultrasound-generated bubbles.

Ultrasound is relatively inexpensive, doesn't deliver ionizing radiation, and unlike MRI doesn't require a 3 or 1-Tesla magnet and the associated shielding to operate, nor does it require cooling with helium, a rapidly depleting resource.

But there are hurdles to be cleared before ultrasound is ready for the home. While ultrasound at levels used in diagnostic work is not known to cause any harm, large-scale epidemiological studies have not been done, Carson says. These might be necessary before devices are put in the public's hands, especially as the systems might end up being used for non-medical reasons.

Ultrasounds are also largely priced out of the consumer market. Even GE Healthcare's smartphone-sized scanner, the Vscan, released a few years ago, costs about $8,000, according to published numbers.

But work is underway on cheaper systems — Newcastle University researchers, for instance, are trying to build a low-powered one for $65 for use in field work. More importantly, certain technical limitations are holding back the modality from its true potential, Carson says. However, he thinks the industry might not be too far away from a breakthrough.

Carson says for now, ultrasound would be hard to work with for a layperson, and it's also closed off for some procedures: images have too many artifacts and too much speckle, the random, noisy interference generated by the reflected sound waves.

To really carry out the aberration correction needed to reduce artifacts and clear out the "clutter" or the scattering of the acoustic signals, more elements in the ultrasound transducer are needed. Many more. While most multiple-element commercial systems have at most 192 elements, Carson thinks they should have as many as 15,000. And each element needs to be attached to an electronic channel at as close to a one-to-one ratio as possible: for 15,000 elements, ideally you'd then need 15,000 electronic channels.
1(current)
2