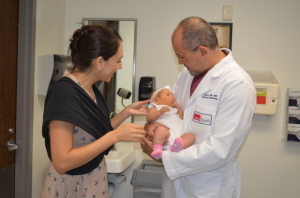 Mother Leonora Orejuela,
baby Lucia Muñoz Orejuela
and UTMB Dr. Sami Kilic
at the UTMB OB/Gyn Clinic.
If it weren't for robots, a three-month-old baby in Texas might not be around. A physician from the University of Texas Medical Branch made the baby's safe birth possible when he became the first in the world to use a new surgical robot technique to perform a delicate procedure on a pregnant woman's cervix.

Pregnant women with weak cervices are at risk for miscarriage or premature birth. To tighten the cervix, surgeons perform a procedure known as abdominal cerclage, in which the cervix is sewn closed.

Though effective, the procedure is dangerous. If the surgeon is slightly off target, he may puncture the amniotic sac or a major blood vessel in the mother.

Surgeons use ultrasound to guide the surgery, but Dr. Sami Kilic, chief of minimally invasive gynecology and research at UTMB, said it was challenging to have to turn his head to look at the ultrasound video then return to the console viewer.

"You were lagging a few seconds, between actual time and real time," he told DOTmed News.

Kilic's new technique uses an add-on to the daVinci robotic surgery system that allows surgeons to view multiple screens, such as the surgery and an ultrasound feed, simultaneously.

Leonora Orejuela, the mother who was the recipient of the surgery, had open cervical cerclage for her first pregnancy. Surgeons had originally planned on using robotic surgery for that first procedure, but concerns over the tap lapse made them choose open surgery instead, Kilic said.

"It was not a pleasant experience," she said in a video put together by UTMB. The procedure requires a deep incision and a long recovery time.

After the robotic surgery for her second pregnancy, Orejuela was able to use the bathroom and eat regularly right after the surgery, and returned home the next day. She went on to give birth to a healthy baby girl.

Robotic cervical cerclage surgeries are not currently common, but Kilic predicts that they will likely increase as more women give birth in their later 30s and early 40s, when complications are more likely.

Women can have a shortened cervix after receiving a cervical biopsy, Kilic said, or because of an inherited condition called "incompetent cervix".

Kilic also predicts that other surgeons around the country will pick up his new technique, described in an article published online this month in the Journal of Minimally Invasive Gynecology.

"It will set the rules for the future," he said.