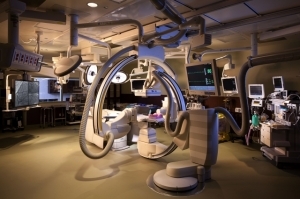 The hybrid OR market is
poised for growth.
(Credit:Steris)
From the March 2013 issue of HealthCare Business News magazine
Nearly 10 years ago, Dr. Alan Lumsden, a vascular surgeon and pioneer of minimally invasive surgical techniques, was lured from his post at Emory University in Atlanta to the sprawl of Houston, Texas. Lumsden, who now directs the DeBakey Heart and Vascular Center at Methodist Hospital, says part of what drew him to the Lone Star State was that he was offered access to a very early form of a new kind of surgery suite: the hybrid operating room.

Hybrid ORs mean different things to different people, but they’re usually defined as the combination of a catheter lab and an OR; or rather, the installation of a fixed angiography X-ray system in a sterile operating room environment. The rise of minimally invasive procedures that need real-time imaging as well as a working OR as a backup should anything go wrong is leading even smaller hospitals, not just academic medical centers, to look at building these hybrid rooms.

“It’s clearly the wave of the future,” Lumsden tells DOTmed Business News.
While it’s a growing wave, not everyone has an easy time riding it. Analysts have reported training issues for staff trying to get the hang of complex new devices and occasional struggles to fill the rooms with enough volume to justify their multi-million dollar price tags. Hybrid rooms cost, on average, 67 percent more per square foot than a traditional surgery suite. But the push for potentially safer techniques that work best in a hybrid OR means, as Lumsden says, this sector is poised for growth.

While hybrid rooms have existed in some form or another avant la lettre, it wasn’t until 2008 that they really took off, according to Frost & Sullivan analyst Sujith Eramangalath. That was also around the time OR and imaging equipment vendors began to come together. In 2007, Philips spent six months touring the country and setting up formal interviews with OR companies to find a partner for new hybrid OR ventures and learn more about the industry, according to Brian Grant, the project and planning manager with Skytron, an OR equipment maker. After two qualifying interviews, Philips picked Skytron, he says. In the 2008, Philips announced it reached deals with Skytron and Steris, another OR vendor.

“None of these partnerships ever really existed (before then),” Grant tells DOTmed News. “But you had to do that in order to be successful in this new world. I didn’t know about your equipment, and you didn’t know about my equipment.”

Now most of the imaging vendors and OR manufacturers have deals with each other. In addition to Philips, Skytron, for instance, has partnerships with Siemens and Grant says they’re also working on agreements with GE and Toshiba. Siemens says it has deals with, in addition to Skytron and Steris, Trumpf, Stryker and Berchtold.
1(current)
2
3
4
5
6
7