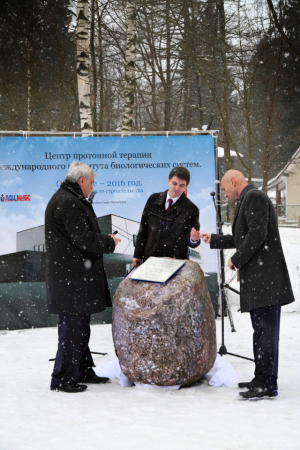 A stone ceremony
inaugurates St. Petersburg's
new proton center.
(On the left,
Gov. Georgy Poltavchenko;
on the right,
Dr. Arkadi Stolpner)
Before physician and entrepreneur Dr. Arkadi Stolpner opened Russia's first private MRI center in St. Petersburg almost a decade ago, he said the waiting times for a scan were sometimes as long as a month. Now, patients usually only have to wait two to three days.

"MRI became much more available for patients and we're proud of that," he told DOTmed News.

Since launching in 2003, Stolpner's chain of imaging and radiation therapy centers has grown rapidly, and today the Diagnostic Treatment Center of the International Institute of Biological Systems runs some 60 centers throughout Russia. While the group continues to expand -- two centers have opened in Ukraine, and one is coming to Armenia -- Stolpner has now embarked on a more ambitious, and expensive, project: bringing the first private proton therapy center to his hometown.

One of the most high-tech radiation oncology treatments, proton therapy uses precisely focused beams of radiation to scramble the DNA of cancer cells, killing them. Although the exact benefits are up for debate, theoretically the technology allows doctors to spare healthy tissue, as the radiation dose falls rapidly away from the target. This is thought to be especially useful for children with tricky spine and brain cancers.

But the centers, which require massive accelerators to fire the protons, and nearly as massive gantries to direct the beams, are expensive, often costing well over $100 million.

Unsurprisingly, they're uncommon, with only a score of such centers around the world, and only nine currently operating in the United States (though one is set to open in New Jersey next month). In Russia, three facilities can offer proton therapy, including one in St. Petersburg, but they're all run by physics research institutes, not hospitals or clinics, and therefore the volume of patients they can treat is low, Stolpner said. And while the government is building a fully patient-focused center, equipped by Belgian firm IBA and scheduled to open in 2014, it's located in Dimitrovgrad, a city found more than 800 miles southeast of St. Petersburg, which borders Finland.

But the situation, at least in St. Petersburg, should soon change if Stolpner gets his way. Much as he did with MRI, Stolpner hopes to make protons more accessible to Russians. To that end, his group is developing the first privately funded proton center in St. Petersburg.

Although the two-room center, estimated to cost between $135 and $145 million, is expected to be completed in four years, it has already experienced several important milestones, including, this week, a symbolic groundbreaking. On Tuesday, St. Petersburg city officials gathered for a stone ceremony, a function that marked the initial public step in developing his group's center, Stolpner said. At hand for the ceremony were local bigwigs, including the recently installed governor, Georgy Poltavchenko, and his deputy, Sergey Viazalov.
1(current)
2