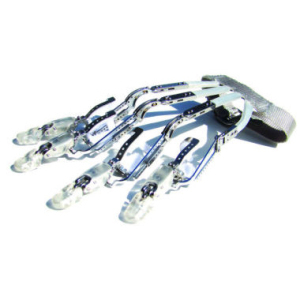 The X-System is a
series of stainless
steel components that
can be assembled
into several hundred
configurations of artificial
hands.
This report originally appeared in the September 2009 issue of DOTmed Business News

Modern technology has greatly advanced the manufacturing and usefulness of prosthetics. Researchers and inventors are designing prosthetics that closely mimic natural joints and limbs. Even though there have been substantial strides made in the field, the improvements are still significant year after year.

With prosthetics more lifelike than ever, individuals fitted for them are more willing to accept them; because what can be done with a prosthetic arm, leg, knee, hip, finger or eye could never be done before.

What makes this possible is the research and inventions from great minds working independently or for research institutions, hospitals, companies and government agencies with the main purpose of creating prosthetic applications for virtually every part of the human body. 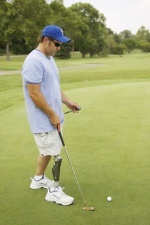 Over the past five to ten years, by far the greatest advancement in the field of prosthetics has been the use of microprocessor technology to operate the major joints of the prosthesis (knees, hands and elbows). These days, it is not uncommon for a prosthetic component to require a laptop computer for programming the device to the wearer's needs. Nor is it uncommon for a user to have to plug-in their prosthesis at night so that an internal battery can charge while they sleep.

Maguire says that the terms "bionics" or "robotics," have not been widely accepted within the prosthetic industry, instead, "we typically use the term microprocessor technology". This terminology indicates that the prosthesis has a computer processor on board, similar to a personal computer, that reads inputs from sensors and then calculates adjustments to the prosthesis to accommodate the wearer's activities. The Advanced Prosthetics Center has a unique business model in which the company utilizes the latest in both prosthetic technology and fitting techniques and places a strong emphasis on specialized physical therapy. "We have learned that it is more difficult for a patient to benefit from advanced technology until they receive physical therapy from a gait and mobility specialist," says Maguire.
1(current)
2
3
4
5