Flash therapy, which delivers ultra-high doses of radiation in less than a second, is moving closer to reality and equipment manufacturers continue to integrate imaging in order to adapt therapy to patients' real-time conditions.

Here's what's new in both proton therapy and radiation therapy.

Hitachi Proton
Last fall, Hitachi announced that it had agreed in principle with Mayo Clinic to build the first carbon ion treatment facility in the U.S.

There are several such facilities in Japan, many of them subsidized by the government, said Sash Matsumoto, vice president of sales and marketing at Hitachi America Ltd.

“It’s been very difficult to bring carbon therapy to the U.S. because of the high costs, and there’s no reimbursement for it,” Matsumoto said. “[Mayo Clinic] really wanted to bring a game-changer.”

There’s still a long road before the facility opens and it won’t be treating patients until after 2025.

“There’s a lot of work ahead of us but we’re really excited to bring carbon therapy to the U.S.,” Matsumoto said.

Last fall, Hitachi provided its system with real-time gated proton therapy capability to Sibley Memorial Hospital in Washington, D.C., which is part of Johns Hopkins Medicine. The system allows for real-time beam irradiation to the tumor while compensating for movement, particularly for lung, liver and prostate cancers. This is the first system with real-time gated proton therapy installed outside of Japan.

With 36 centers in operation, IBA recently hit the milestone of 100,000 patients treated with its proton therapy systems.

Another article, published in the International Journal of Radiation Oncology, Biology, and Physics, looked at the company’s ProteusPLUS for use in Flash therapy in mice at Penn Medicine.

“This shows that protons can be used for the Flash effect, delivering more dose while sparing healthy tissue,” said Nicolas Denef, director of product management for proton therapy at IBA.

IBA also continues to develop ARC proton therapy, which the company says provides faster and simpler treatment, with the potential to reduce the integral dose and achieve better dose conformality.

"We irradiate within a window when the tumor is in the location we know, and stop when it is out,” Denef said.

The second step will be to more precisely visualize the tumor movement.

Mevion also integrated the SDX, a respiratory monitoring and measurement system by DYN'R, which released a model that integrates with the HYPERSCAN in May of this year. In addition, Orfit Industries and CIVCO Radiotherapy also released couch tops designed for the MEVION S250 Proton Therapy Series Systems in June and July of this year.

Like many of the Mevion-affiliated proton therapy centers around the world, Barnes-Jewish Hospital has been successful, and added a second fully independent treatment room that went live in July, Rosenthal said.

Mevion is the only vendor that has been granted approval for marketing in Canada and was selected to provide equipment for a proton therapy center in Córdoba, Spain.

Varian
At ASTRO last year, Varian Oncology Systems unveiled Ethos, the world's first cancer care delivery system powered by AI. The radiation therapy system is designed to adapt treatment to the patient on a day-to-day basis, based on the tumor and any patient anatomical changes, such as weight loss, in the standard 15-minute treatment time slot.

The product has had a good response, said Kolleen Kennedy, president of proton solutions for Varian.

“We're seeing the number of patients per day really start to accelerate as people understand the power of what that system can bring,” Kennedy said.

The company also recently launched its RapidPlan PT software for proton therapy planning. The software comes with machine learning capabilities that cuts planning from one to two hours to less than 10 minutes, according to the company.

“It allows them to take advantage of a tool that they already know and love for their conventional photon therapy, for proton therapy,” Kennedy said.

The company is also investing in preclinical research and a clinical development program for Flash therapy, which provides ultra-high, cancer-killing radiation dose in less than a second.

On the business front, Siemens Healthineers announced a deal in August to acquire Varian Medical Systems for $16.4 billion.

“We’re very excited about the opportunity this will bring for cancer patients around the globe,” Kennedy said. “We believe that this will help accelerate our ability to achieve our mission of a world without fear of cancer.”

Accuray
Originally developed for the CyberKnife System, the FDA recently cleared Synchrony real-time motion tracking and correction technology for the Radixact Treatment Delivery System. The addition of Synchrony on Radixact enables SBRT cancer treatments to the lung, liver, prostate, and any other anatomic regions prone to movement.

“This [Synchrony] allows clinicians to deliver tightly conformed doses to targets that move, very efficiently” said Corey Lawson, vice president of product strategy at Accuray. “By being able to accurately and precisely follow moving targets, our clinical partners have expressed a heightened sense of confidence in treating such challenging cases with fewer fractions.” 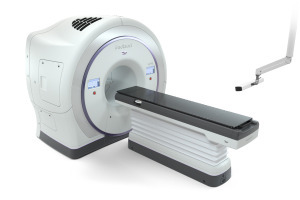 Radixact with Synchrony Bar
The company recently applied for an FDA 510(k) for helical KVCT imaging technology on the Radixact Treatment Delivery System, which is built on their unique slip ring platform, the same type of platform used for diagnostic CT. The technology will provide the benefit of being able to acquire helical images for patient setup, adaptive monitoring, and re-planning when warranted.

“Our adaptive solution allows clinicians to monitor the amount of dose each anatomic structure receives with each fraction,” Lawson said. “If patient changes impact treatment objectives, our solution makes it easy to adapt the plan, ensuring the patient receives the optimal treatment, from the first fraction to last.”

Brainlab
This year, Brainlab received regulatory clearance for a new version of its ExacTrac Patient Positioning and Monitoring system, gaining a CE Mark in April and FDA 510(k) clearance in July. Called ExacTrac Dynamic, it is a solution for precision radiotherapy positioning and monitoring that can accommodate a wide range of linacs and clinical workflows. The system expands clinical workflows and the variety of indications for which it may be employed. Highlights include new and advanced integration of multiple tracking technologies — surface, X-Ray, and first-of-its-kind high-speed thermal tracking — and a 4Pi mask system with three different types of immobilization.

More than 130 customers have purchased the system and are awaiting installation, said Patrick Murphy, director of the oncology portfolio at Brainlab. 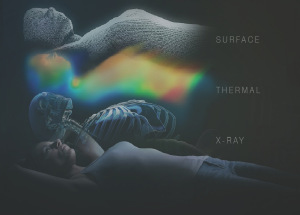 ExacTrac Dynamic from Brainlab
The first patient has been treated in Germany, and the open-mask system provided a more comfortable experience for the patient, according to Murphy.

“The physician also said it was intuitive to use,” Murphy said.

This fall, there are updates coming for Elements Multiple Brain Mets SRS, Elements Cranial SRS and Elements Spine SRS to automate best practices in radiosurgery planning. The software updates use conformity and gradient indices, as well as guaranteed target dose coverage as optimization parameters, to create treatment plans in a few minutes.

In June, the company announced that it had acquired Level Ex, a U.S. company that creates video games for physicians, allowing them to do virtual run-throughs of surgeries.

With COVID-19 impacting travel, the company also plans to use this technology to create a virtual demo of ExacTrac Dynamic to simulate a clinical site visit.

“Capitalizing on 30 years of Brainlab experience, partners, competitors and startups have access to Snke OS open interfaces, instead of building everything from scratch from the ground up,” Murphy said. “This digital operating system makes it possible for users to integrate their own solutions for imaging, navigation, robotics, cloud computing, AI and mixed reality into an overall system, and effectively tap into the possibilities of digitalization,” Murphy concluded. 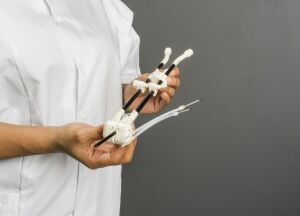 Geneva brachytherapy applicator from Elekta
Elekta
In December 2019, Elekta received FDA 510(k) clearance for the use of diffusion-weighted imaging with the Elekta Unity high-field MR-Linac. This allows the biologic assessment of tumor response during therapy, which allows for treatment personalization, said Ioannis Panagiotelis, chief marketing and sales officer for Elekta.

In mid-July, the company received FDA 510(k) clearance for Geneva, a universal gynecological applicator for brachytherapy. Panagiotelis says the modular device allows the therapy to be tailored to each patient’s unique pelvic anatomy, accommodating up to 75% of patients with cervical cancer.

“It takes less than a minute to create multiple plans and will allow physicians to compare plan options and select the best one,” Panagiotelis said.

Elekta also has made some recent acquisitions, including of ProKnow, a company that makes cloud-based treatment planning analytics software, and Kaiku Health, which offers an app that monitors patient-reported outcomes and provides symptom tracking.

Pyrexar
Pyrexar focuses on MR-guided hyperthermia, or deep-tissue external thermal therapy, in which RF energy waves are absorbed by the tumor, causing cell vibration and cell friction, which causes the cancer cells to heat up. MR imaging provides information on heat volume. This is done in conjunction with radiotherapy for recurrent cancers.

The company recently released a new applicator for its BSD-2000 3D/MR, also called ARCH, and has developed a new water system that surrounds the patient inside the applicator with a temperature controlled bolus of deionized water.

“Surrounding the patient in water helps direct the RF energy inward instead of broadcasting like a radio station tower,” said Drew Wilkens, vice president of marketing and sales for Pyrexar. “the new patient applicator and water system are intended to dramatically reduce workflow for the clinicians.”

The company’s products are distributed in 31 countries, though the BSD-2000 3D/MR is not yet FDA cleared. The Maryland Proton Treatment Center, Long Beach Memorial Hospital, UCSF Medical Canter and Cancer Treatment Centers of America use the company’s BSD-2000. 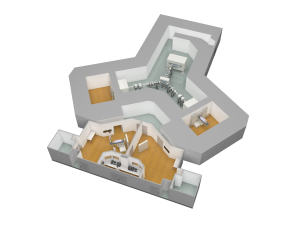 Sumitomo BNCT System NeuCure
BNCT uses a boron drug that is taken up by tumors. The device used to generate the neutron beams is much smaller than a proton accelerator, said Shin Masui, sales manager for Sumitomo.

“The footprint is smaller than a proton accelerator and the energy is much lower,” Masui said.

There are some U.S. researchers interested in the technology, but the company will need to look at the market conditions moving forward, Masui said.

“More clinical results will convince doctors, but it will take a little longer,” Masui said. “Maybe a year or two years. BNCT will become increasingly familiar over the next 10 years.”

TeamBest Companies
Best Medical International, a member of Team Best Global, recently introduced its Best Integrated Brachytherapy System, which it provides to customers on a per-use basis, with payment based on the number of cases they perform. The arrangement is part of the company’s commitment to provide equipment to facilities that are not able to make a large capital investment, said Krishnan Suthanthiran, president of TeamBest.

The system provides a total brachytherapy solution, including applicators, an ultrasound imaging system and a chair/table.

“Brachytherapy is the least expensive and most conformal radiation therapy and has been underutilized,” Suthanthiran said. “With BIBS, we can improve the clinical outcome at about the same cost as now, but patients will benefit significantly as more clinicians can perform better and more accurately.”

Best Medical International is currently developing the first 400 MeV ion rapid cycling medical synchrotron, for variable energy, from proton to carbon heavy ion treatments. This can be established as a single room or multi-room, with or without gantry, offering variable energy from 230 MeV to 400 MeV. This is expected to be completed and ready for treatment in 2023.

Best Cyclotron Systems Inc. and Best Theratronics Ltd., members of Team Best Global, have several new cyclotrons on the market, and are also developing a dedicated proton therapy system that Suthanthiran said will be available for treatment in 2023. They are currently manufacturing Cyclotrons in energy ranging from 1 MeV to 150 MeV for research, radioisotope production, and proton therapy treatment for head and neck, eye and pediatric cancers at various price options. These are available with single or multi-room, and with or without gantry options.

“TeamBest Global’s goal is to establish its own medical centers as a nonprofit healthcare delivery system, using its affiliated non-government organizations, mainly Best Cure Foundation, starting in India and expanding to the U.S. and Canada,” Suthanthiran said.