by Lauren Dubinsky, Senior Reporter
As hospitals focus their efforts on caring for COVID-19 patients, MR scans have dropped off. But many facilities are taking advantage of the downtime by using it to perform overdue maintenance.

“MR is not really one of the modalities utilized for COVID treatments, and as a result, they have seen a significant drop-off in patients coming through,” said Joel Kellogg, director of business development for healthcare/IG at ETS-Lindgren. “We’ve seen people taking advantage of this slower period to do some much-needed maintenance on their MR suite like making some minor modifications or upgrades to accommodate changes in equipment.”

Although the majority of MR scans are on pause, some are deemed “medically necessary” and cannot be put off. Because of that, the MR suite, just like many other areas of the hospital, must adhere to personal protection requirements for technologists and the recommendations for cleaning MR equipment after scanning COVID-positive patients.

Keith Kopp, president of Kopp Development, cautioned that it’s too early to determine the full effects of the pandemic on MR safety, but he has noticed a general desire to reduce physical contact with patients, such as pat downs for ferrous objects.

Kopp's FerrAlert Target Scanner
There is also a big push right now to have as little contact as possible between staff members. Kopp is currently working on a product that will allow facilities to monitor MR suites without being onsite by providing retroactive data on how the MR room and ferromagnetic detection systems are being used.

But it’s important to note that hospitals aren’t in the best financial situations at the moment to purchase new equipment.

“Budgets are stressed, and the reality is that most safety equipment is not a billable procedure, so it’s potentially a drain on the bottom line, at least in the short-term,” said Kopp.

He added that hospitals should consider that if a product results in fewer MR incidents, then it will most likely pay for itself in the long-term.

Joseph Barwick, founder of Aegys Group, encourages hospitals to look to the future when considering these financial decisions.

“There will be even greater pressure when COVID-19 infections and hospitalizations are brought under control and imaging procedure schedules return to full capacity and beyond to address the backlog,” he explained. “The investment in MR safety tools that reduce or eliminate manual practices and increase efficiency in screening and access control will be a necessity to ensure that as volumes increase there is no corresponding increase in adverse events.”

Hand-held devices are all the rage
Over the past couple of years, Kellogg has noticed that facilities are increasingly interested in deploying some sort of physical barrier coupled with a hand-held device to screen patients and individual objects.

“We see people kind of migrating away from entryway systems,” he said. “It seems like users still experience a high number of false positives and suffer from alarm fatigue, which, in turn, can make those devices less effective.”

ETS-Lindgren’s MRI Patient Scanner is a portable metal detector that detects both ferromagnetic and non-ferromagnetic metal objects. The scanner has three analysis modes that can detect any metals in the patient’s body and their magnetic susceptibility.

In November, Kopp Development acquired Mednovus’ ferromagnetic detection business, which included a hand-held detector. The product, which was rebranded as the FerrAlert Target Scanner, is generally used for non-ambulatory patients who cannot go through standard portal detectors or single-pillar detection systems.

“It’s hard to screen patients that are in a wheelchair or on a gurney using standard metal detectors because they usually are metal,” said Kopp. 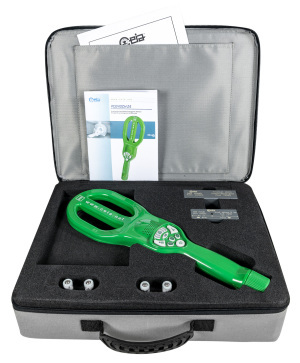 CEIA's PD240CH-Z4 Hand-held Patient- Screener
The FerrAlert Target Scanner is in use in thousands of facilities in the U.S., including the top 20 hospitals. Kopp has been working on taking the product international since December — they are starting with Italy, which recently passed legislation that highly recommends the use of a ferromagnetic detector in MR suites.

CEIA is also in the hand-held device game with two new products. Its CEIA PD240CH Handheld Patient Screener is the only handheld screening device capable of detecting all metal on one setting or only ferrous metals on another setting, according to the company.

The CEIA PD240CH-Z4 Handheld Patient Screener has that same functionality and is also MR-Conditional certified. Because of that, it can be brought into and utilized within the MR room.

What else is new?
Aegys recently introduced the second generation of its TechGate Auto warning system that controls access into the MR room. This new generation includes features of the original TechGate barrier system, but it can also be automatically deployed.

“This automatic deployment engages whenever the technologist enters or exits the MR room, ensuring that the LED lit warning message is always extended across the doorway into the MR room,” said Barwick. “Push button retraction of the barrier allows for unobstructed access when the technologist determines access is appropriate and safe.”

The alternatives to this are plastic chains or retractable belts placed at the entrance of the MR suite, which require manual operation. These options can obstruct emergency exits and workflow, and the lack of a light warning system can lead to mixed messages.

Metrasens launched its new Watchman-HD system that provides high-definition video and audio recordings of anything approaching the MR zone 4 doorway, which is triggered by alerts from the company’s Ferroguard Assure ferromagnetic detection system (FMDS). 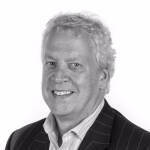 Colin Robertson
“This provides MR facilities with unrivalled capabilities for root cause analysis in the event of MR incidents or near misses,” said Colin Robertson, senior vice president of sales and marketing. “It is a significant advance on the low-resolution still-image systems available from other providers.”

Over the past year, Metrasens also made enhancements to its FMDS products, including the Metrasens Safety Suite web-portal. This product allows imaging department managers to access a suite of MR safety metrics for all their MR systems from any web-connected device.

A rise in MR adverse events
Although there is a plethora of MR safety products on the market and comprehensive recommendations from organizations including the American College of Radiology (ACR), MR adverse events still remain an issue.

According to data from Gilk Radiology Consultants, the number of MR adverse events has increased about 525% since 2000 yet the volume of MR scans has only increased about 150% in that same time frame. However, it’s difficult to pinpoint the reason for this. 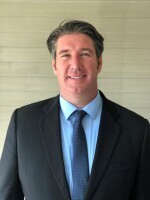 There has been a growing interest in implementing safety-conscious organizational approaches within imaging departments, according to Barwick. These approaches encourage reporting and the use of comprehensive root cause analysis procedures.

“These fundamental changes encourage a continuous improvement mindset which we have seen adopted by several of the leading imaging departments around the country,” he added. “On the other hand, we still hear of far more off the record adverse events than those that are actually documented and reported, so there is a lot of room for growth on this.”

Kopp thinks that this rise in adverse events is the result of a variety of factors from the increase in scanning acute patients to the age of the modality. MR has been around for about 30 years and there tends to be an attitude of complacency when a technology is around that long, he said.

But he believes that one of the biggest factors is the design of the MR magnet itself. With the original magnets, if someone had something ferrous in their hand, they would feel a gentle tug that grew stronger as they neared the magnet.

“The newer magnets have very effective active shielding, so you could be walking in with scissors in your hand and you won’t feel anything until you hit a certain point in the slope of the magnet that goes up dramatically,” said Kopp. “At that point, if you take another step, before you can get a tighter grip on what you’re holding, it’s out of your hand and flying into the magnet.”

What can be done about this?
Fortunately, facilities can avoid the potential for adverse events by following a few best practices. For starters, a rigorous screening process needs to be put in place for patients and anyone else entering the MR room.

If safety products such as screeners, hand-held devices or physical barrier systems are used, the facility needs to ensure that staff members are trained on how to properly use those different types of devices. 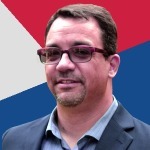 Joel Kellogg
“Anytime they are designing a new facility or upgrading a facility, they have to really engage a safety expert or a company that sells safety products that will partner with them to work that into their processes and procedures so that they are effective,” said Kellogg.

Metrasens’ Roberson recommends implementing a four-zone model of access control, labeling objects for MR conditions, removing unneeded electrical conductors, requiring the use of hearing protection for everyone in the room and providing a minimum of one-centimeter space or padding between the patient and the active coil element.

The company claims that these practices could have prevented 74% of MR injuries reported in the FDA database.

New regulations
ACR has published whitepapers outlining its MR safety recommendations for years, but this year the organization did something different. In April, it launched an MR safety manual that ACR-certified sites are required to follow.

Along the same lines, the Facility Guidelines Institute (FGI) put out new guidelines in 2018 that require a ferromagnetic detector in the MR room. The FGI Guidelines for Design & Construction of Hospitals is the most frequently-used minimum standard in the U.S. for healthcare and hospital design, according to Tobias Gilk, founder of Gilk Radiology Consultants, and a consultant for Metrasens.

“We’ve had customers come to us in a state of panic because they couldn’t get a certificate of occupancy on a new facility, because they did not comply with their building code,” said Kopp. “More and more hospitals are becoming aware that it would be a terrible situation to be in to have an incident that could have been prevented if they followed their state’s building codes.”

Part of the solution is ensuring the architects are aware of the law in that given state and how to implement it in their drawings. Every state’s building codes are unique and depend on whether they adopted the FGI guidelines and if so, which version.

“It’s not like electrical requirements, which is hospital-wide — there are a lot of unique requirements for MR and most people who only work on them occasionally might not know them,” said Kopp. “It’s not really their fault — it’s just the nature of the situation.”