Hospitals should cover and wrap protective materials around any cabinets and other items they cannot remove from the room during an installation or deinstallation.

Are you prepared for a major medical equipment moving job?

by John R. Fischer, Senior Reporter
As some hospitals begin to contemplate a post-pandemic reality, there is more to consider than just resuming elective and non-urgent care. For many facilities, it means getting back to planning capital equipment installations and deinstallations that were deferred indefinitely by the crisis.

Such projects are collaborations involving multiple parties, and a well-executed job requires a lot of preparation on behalf of the provider facility. HealthCare Business News sat down with some experts who specialize in installing and deinstalling medical imaging systems, to talk about the roles and responsibilities a provider can play in a successful job.

Communication is key
The most common issue that arises in any medical equipment logistics job is a lack of communication among all parties. This often leads to confusion around who is responsible for what, with the healthcare system or hospital unaware of what it needs to bring to the table. 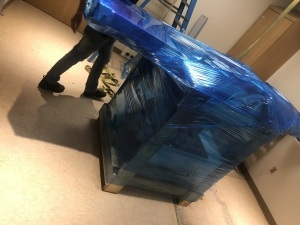 Some installations require an elevator if taking place on floors above the first. Some may even need to be brought in through a window using a crane.
“Sometimes when the client goes to partner with Sigma for either an installation and deinstallation, we use that as a clarifying moment and explain, ‘This is our role in the process’,” Kathy Empie, senior project coordinator for Sigma, told HCB News. “We specifically interact with the equipment only. The responsibility of the client will be site preparation. That means hiring your own general contractor. Some examples of work that needs to be subbed out, depending on the project, could be getting a licensed electrician to install the new 480v or an HVAC service provider to disconnect and drain the MR’s chiller. Sigma does not provide those services, but we can make recommendations based on contractors we have worked with previously.”

Contractors and electricians are just two of the additional parties that may be involved in installations or deinstallations. If these parties do not continuously communicate their needs, many problems can occur. One problem that Gustavo Polo, owner and president of GP Medical Equipment, has seen is when the electrician shuts off the electricity during a deinstallation job. This prevents the service provider from testing the system to see if it works, should the client want to resell it, and makes it harder to remove.

"On a fluro room you need to pull the rear bolts on the table,” he said. “If your unit is locked in center position, you can't get to the center bolts. All bolts need to be out to slide out the 4,000-pound table. The only way you’re getting to these bolts is when you rotate the table at a 90-degree angle. If you don’t have the power or if the power is shut off on the system, you have to manually rotate. If you don’t know what you’re doing and you’re dealing with a bunch of different modalities at one time, you got yourself into a headache.”

Prep the room, floors and hallways
The first step of any job is to develop a plan and timeline for the project. This according to Craig Diener, director of sales, marketing and procurements at Universal Medical, begins with a room inspection to measure dimensions. 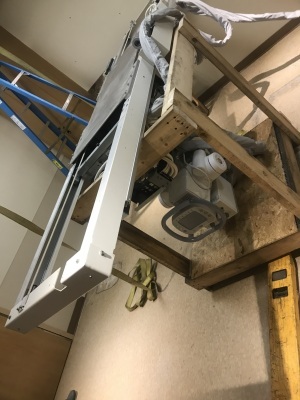 Some deinstallations require the service provider to take apart the machine and remove it piece by piece, such as when it is too big to fit through the door or when a wall cannot be knocked down to take it out.
“This involves more than just length and width of the walls but also those of the door frame, hallway outside the room, and any cabinets or objects that will remain inside the room during construction,” he said. “We need to measure every possible dimension in the room and pathway to ensure the new system will fit. During the planning process a room drawing of the new system should be done to ensure the system will fit in the room and that it can be operated in a manner that allows for proper workflow. Any construction needs to be coordinated so that it occurs between removal of the old system and installation of the new system.”

He adds that it’s best to remove as many objects as possible from the room, to avoid damaging them and to make it easier for the moving team by not having to work around as many items. Those that cannot be removed should be tagged and covered in protective materials to minimize risk of damage.

Loading docks also need to be measured and assessed for transporting systems, as do elevators in jobs that take place multiple floors up. This means having the service provider measure the dimensions and weight capacity of the lift to ensure it can safely deliver the system to the desired location. If it cannot, the facility may need to contact the elevator company for external assistance.

“We try to maneuver it through the same route it came in,” said Bob Iravani, president of Chicago Medical Exchange. “For instance, there are circumstances where the old system was put in with a crane. We therefore have to use the same method to install the new system.”

Once measurements are written down, the service provider draws up a blueprint for how to transport the system through the hospital and shares it with the client to ensure all weights and capacities have been accounted.

The client must then prep the site of construction, by cleaning the room and hallways, removing objects from the room, and helping the service provider acquire the right troughs, cabling, conduits and power. The right dollies with the right wheels are also needed to avoid scuffing floors during transport. For heavy weights, it is often wise to put Masonite down, says Don Tiedemann, CEO of Optimum Medical Imaging Incorporated.

“Follow any type of infection control that they choose to use to seal up any doorways to make sure construction doesn't interfere with any other patients or staff,” he added.

Avoid delays
Polo recently encountered a situation in which a wall needed to be knocked down to remove an MR magnet so the magnet could be rigged outside a second story window. The project came to a halt when it was discovered that the wall in question contained a number of gas lines and air lines.

“For them to take out that wall would cost them $100,000,” said Polo. “A job that should have been easier is now 10 times harder because we have to cut the machine out piece by piece. A three-day job turns into a five-day job with a lot more work.”

A lack of careful planning not only delays construction, but can create risks to individuals involved in the work if not relayed to them. It can also raise costs and ultimately delay patient exams and consequently create more lost revenue for the facility.

“If a customer wants to get something done in a very short amount of time, it’s not that it’s impossible. It’s just that everything needs to line up perfectly,” said Empie. “If we don’t have a project coordination meeting with the customer and contractors to review the final drawing of where electrical panels are being placed, how cables need to be run, and what else must be done, that can cause delays. We want to work as a team with the contractors to ensure a timely delivery.”

Tiedemann says that one common issue he sees is when a person realizes the morning of a deinstallation job that the system being removed still has private information saved on the hard drives. “A lot of times when we’re scheduled to pull these things out, someone will say we have to get IT down here because we need to get patient data off and that could violate HIPAA if we don’t,” he said.

A few more things to keep in mind
Completing an installation and/or deinstallation requires all parties to be in constant communication with one another. One of the best ways for ensuring this is to have multiple meetings, and to not be afraid to ask questions after the project ends.

"Call with any questions," said Empie. "Don’t be afraid to reach out for clarity on the system. I think the fear that customers have is that once the job is done, that’s it and we’re gone for good now. What we like to do with our customers is have some check-ins, especially if they’ve been silent after two weeks. We reach out to say, 'Hey, how do you like your system?'; 'Is it working for you guys?'; 'Does your staff need any more training?' Our goal at Sigma is to be your partner and see your practice thrive." 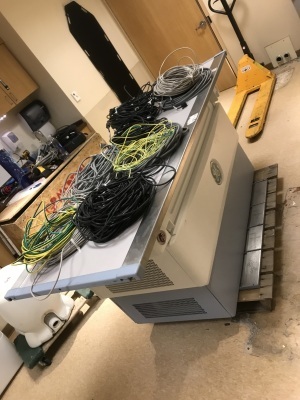 It is important to communicate with the electrician, plumber and construction crew to avoid any issues that could lead to costly delays.
Diener says another key responsibility of the provider is to keep tabs on the different schedules of each contractor involved to ensure they do not conflict with one another. Otherwise, delays or problems can occur.

“Often I’ll get phone calls from people who are frantic,” he said. “They don’t know what to do and have to have their system taken out next week, because whoever is installing the new system is going to deliver and start installing. It’s difficult at that point to get a crew together, go to the site and remove the system at short notice like that. A lot of times, our schedules are made out for 30 days already.”

Sometimes, when there are middle men involved in a project, such as brokers or project managers, they will assume that everything is going to be a piece of cake. This, of course, is not a smart mentality for embarking on an equipment construction job.

“They assume you have large entry doors, a straight run to the room. Sometime it’s easy, sometimes it’s not,” said Polo. “The biggest factor is when you’re dealing with a bigger facility, getting [the system] in and out of the room can be a problem. When you’re dealing with major hospital chains, a room could be on the third or fourth floor. Often they share the loading dock but it may be on a different avenue, meaning you have to go down to the basement floor, shoot across and come out on the other side of the building.”

Any job should end with a final walkthrough to ensure the work is successful, all areas impacted are clean, and that no damage has been done to the room or hospital. Tiedemann takes it one step further by taking photos – and the hospital should do that too.

“At the end of the job, we take completion photos where we have photos of the room,” he said. “We send that info to the project manager and the OEM to make sure they’re happy. When we do that, we don’t get that call a few days later saying there’s a problem.”